New webpages for Prof Chris Oliver are now at CyclingSurgeon.Bike

I have always for as long as I can remember cycled in cities. As a medical student I bravely rode from University College Hospital in central London over Hampstead Hill to Golders Green. I rode come rain, come shine. It saved me so much money and kept me super fit. It cast a dice for future cycling adventures much later in my life; TransAmerica: Los Angeles to Boston, Cambodia, Rajasthan India, Austria and St Malo to Nice. I’ve cycled through a lot of big cities. Perhaps India was the most exciting, it wasn’t just the sheer volume of traffic in cites but all the animals to avoid. Sheep, goats and pigs tend to get out of the way but camels and the sacred cow deserve very special respect. It’s imperative to cautiously cycle round the rear end of a cow or camel!

I’m think I’m lucky to have cycled in…

Brick's Ride Across the UK

Today’s ride was a challenge. It was only 74 miles but 5500 feet of climbing pretty much all concentrated in the first 35 miles. There were several climbs with 18 degree gradients but the kicker was right after Cock’s Bridge where the road abruptly turned upward at a 20 degree slope and continued for a mile varying between 16 degrees and 20 degrees with an occasional respite at 12. As we climbed we headed into dense fog and had no idea what was ahead. Finally, after several “dig a little deeper when you can’t dig no more” moments, the road flattened with what looked like a preciptous drop into the clouds off road on our left, then we descended slightly with great joy and then back into the fog for another quarter mile of the unknown at 18 degrees up. It was one tough climb and I now know that…

Brick's Ride Across the UK

We started at a relatively late 9:30am and headed to Lands End. The morning was a bit nippy and quite windy in the unusual wrong direction; after that the day was phenomenal–sunny but with a slight chill in the air. This was a 74.3 mile day with a ton of hills and 5500 feet of climbing. The downhills were steep, narrow and gave little help up the next hill. A hard days work to be sure. Elevation profile here:

The day started with a proper English breakfast. First, cereal with with what looked like a jam or fruit spread on top. Then scrambled eggs with salmon on granary bread. It was much better than the US style motel turn the cereal crank breakfast. Then time to ride and off to Land’s End, the very tip of England and the place of what self-purports to be the most famous sign in…

So you want to cycle across America?

Meet Chris Oliver, AKA the @CyclingSurgeon, he is an inspirational Edinburgh Consultant Orthopaedic Surgeon. Eight years ago he could not climb a flight of stairs let alone ride a bike. He was over 27 stone and had weight loss surgery. Twelve stones lighter he cycled 3,500 miles across USA in the summer of 2013 with his daughter. Come and be motivated by Chris’s incredible transformational journey and fight against obesity. Details and booking here 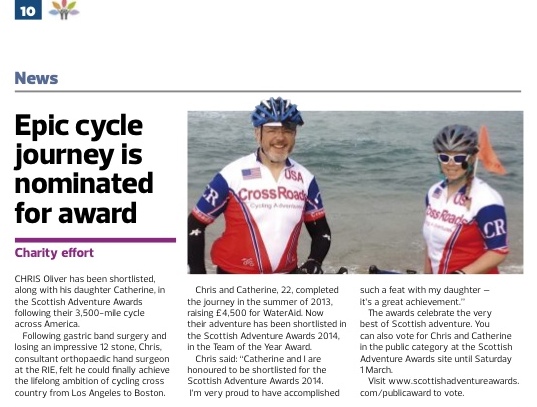 The ‘Cycling Surgeon’ and his daughter across the US for WaterAid
CTC Webpage – June 28, 2013 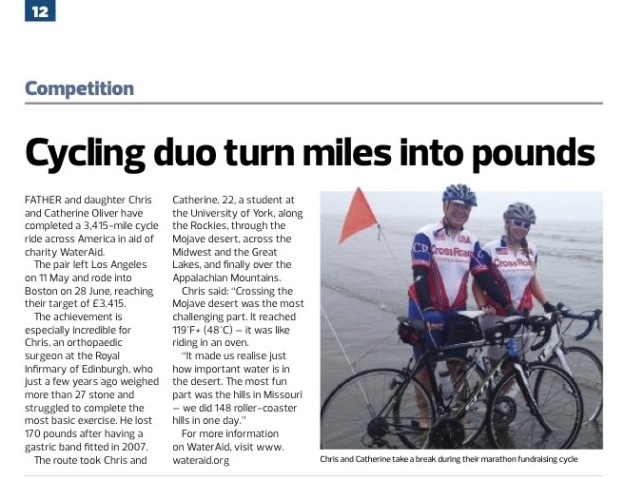 How I lost 12 stone and got my life back
The Weekly News – Aug 3, 2013
Meningitis Trust promotion for the Big Swim in Elie & Cycle 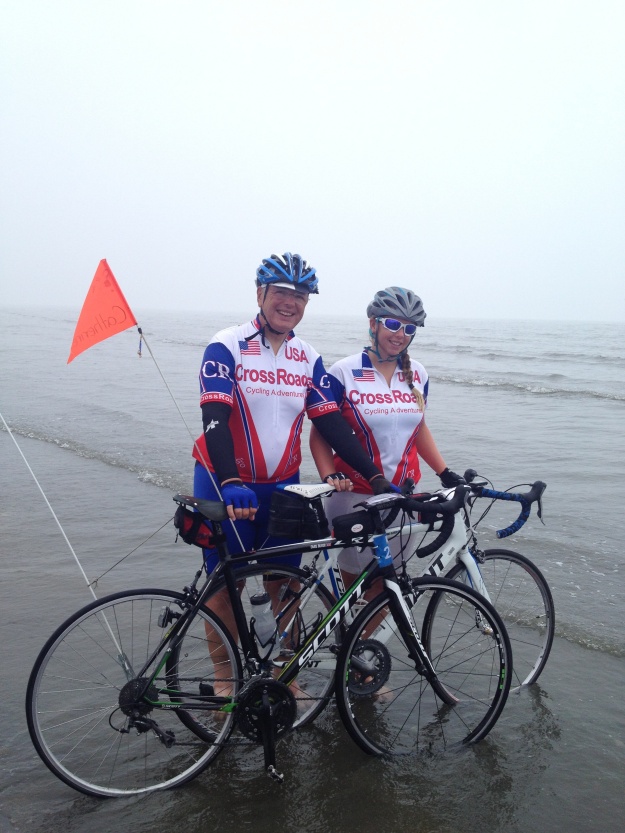 WE MADE IT! Sorry for not posting since reaching the beach last Friday, it’s been a bit of a whirlwind. Dad’s flown home and is back to work and I’ve made it up to New York City to explore. I even got to cycle my bike right past Times Square yesterday in the attempt to get my bike from the Upper West Side to Mineola. The short 3 mile ride was interesting – in stark contrast to the past two months there was so much to look at and without my orange flag fluttering from the back of my bike I felt much more on edge. Luckily I managed to cycle bits and bobs with people on these new city bikes that the city has just implemented. Now THESE people are the ones to look out for. Crazy people.

Riding through the city for that short amount of time forced me to think back along the two months of cycle. Absolutely NOTHING compares to the Big Apple. You wouldn’t think that these tiny towns in the Mid-West shared the same country with NYC, it’s just smack bang in the face big and shouting which is what I used to think America is like. The Dairy Queens and Denny’s were nowhere to be seen on Manhattan – in their place, delicatessens and neighborhoods of delicious international food.

So reaching the beach on the last day was fairly emotional. The weather was so grim that we couldn’t see the Atlantic Ocean until we were about 50m away from it. But that sight was wonderful! Relief set in, mostly that we had no more miles to cycle and also that we’d made it, mostly in one piece. My bike started skipping gears on the last day and I just willed it to hold out until the beach.

Upon leaving the hotel for the front wheel dip way back at the start of May, dad got his first puncture (and tyre replacement) of the trip. As we’re in a bigger group of riders (about 25) we agree to cycle together at the very start and end of the trip. We joked that dad would get a puncture just before we reached the beach, meaning that we’d all have to wait until it was fixed before cycling to the ocean. And guess what? He did! We were about 100m from finishing the 3,415 miles and I heard a hissing noise coming from his bike. Sod it. He rode the last part of the ride with a flat tyre, ready to throw his ill-tempered bike into the Atlantic Ocean, never to ride it ever again.

Just joking. We only dipped the front wheels in, got our photos and were met by family and friends. Thanks to mum and Elizabeth for being there! I was less emotional than others I think. To me, this wasn’t a life changing trip but merely a fun experience and a good way to spend time with my dad and see America.

What I’ve learnt from this trip is that you really need to take care of yourself physically. We had women aged 69 on his trip and men aged 76 – yes they were a little slower than the rest but the bottom line is – they rode their bicycles across a continent. These people keep fit and eat well and I imagine they will go on to keep completing similar feats like this. Seeing them has made me want to take care of myself better. At age 70 I could either be contemplating moving into ‘an old folks home’ or rowing across the Atlantic. I’m aiming for the latter.

The people and staff on this trip have been superb! If you’re considering riding across America, I seriously recommend Crossroads Cycling Adventures, no matter what age you are they work so hard to getting you across safe, happy and healthy. It’s been great to spend this amount of time with dad – it might never happen again. It got a bit too much at times but I’m sure it would for many people sharing a room for 7 weeks with their dad?

Thanks to those who’ve donated towards our fundraising for WaterAid – we’ve smashed our target and raised £3,863 which is just amazing! You can still donate here

Thanks to you reading this blog and for those we’ve met along the way. Support is always appreciated. It got tough sometimes and it was nice to know we were cycling for a cause and people had our backs.

Oh and the verdict on East vs West. I’m going to have to say the West. They have the Pacific Ocean and therefore lots of cool sharks so it’s a no brainer really. What’s next for us? Dad’s back to work and ever active with cycling in Scotland and I’m off to Bangor University in September to do a MSc in Marine Environmental Protection. So absolutely nothing to do with this cycle – which is perhaps a good thing? Time to expand my horizons a bit further than the United States of America again. I think it’s time to cross the Atlantic Ocean.

Two Bikes Across America 2013
Create a free website or blog at WordPress.com.